skip to main | skip to sidebar

Computer Science and Engineering (CSE) department of the University of Moratuwa is where i did my undergraduate studies and last month the department celebrated its 25th anniversary. Here are some of the sucess storeis from the students in the past.
Posted by Jaliya Ekanayake at 1:00 AM No comments:

Sri Lanka is the Pearl of the Indian Ocean, but due to the past terrorist activities people lived there in fear. Last year our brave soldiers eliminated the terrorism from our country under the leadership of president Mahinda Rajapaksha, and today the people of Sri Lanka selected the same great president as their president for the coming 6 years. In addition, Sri Lanka was recently promoted as a second world country and listed as an emerging market by the IMF.

Most factors are in place for a better development of our country and hope we will continue to develop as a great nation again!!!
Posted by Jaliya Ekanayake at 9:28 PM 4 comments:

Just watched a news report showing the trouble caused by Snow in many part of the world. Europe, China, and even in India. In China people have died because of the harsh weather.

I think it is time for all of us to act fast to prevent global warming.
Posted by Jaliya Ekanayake at 6:16 PM 1 comment:

Beautiful Sri Lanka - A paradise for sure

Beautiful Sri Lanka.
http://www.srilanka.travel/
Posted by Jaliya Ekanayake at 11:37 AM No comments: 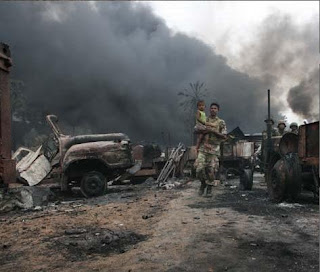 Today, our armed forces have eliminated the terrorism from my country. Many sacrificed their limbs and lives to achieve this. With all the destruction and the blood in war we can see hope, hope for the future generations. We should remember all who sacrificed their today to give us this hope forever. I think the above picture captures a lot of aspects of the mission ...
(I found it from here)
Posted by Jaliya Ekanayake at 11:17 AM 2 comments:

About three weeks back, most people were stunt by the Swine Flu outbreak and the news related to that. WHO raised the pandemic alert level to 5 calling it a widespread human infection. Most media started educating people, locating epi-center and identifying the patient zero and almost created a widespread panic. We realized this when one of my friend try to find a surgical mask because he planed to travel by plane. We could not find a single surgical mask in most of the pharmacies in Bloomington IN. Thanks to media people have already started preapring for a widespread flu outbreak.

However, after about a week of its start, the media has reduced its weight on the flu outbreak although still the threat is at level 5 according to WHO. Somehow the media has figured out ( or may be instructed) that creating a panic among people does not make any good to the situation.

In my openinon this movement of media is good although they created a big panic at the bigining. They educated people, they provide real infomation, then they regulate themselves and now following up the situation.

Now let's see what is happening in Sri Lanka.

Sri Lanka is fighting with LTTE (a ruthless terrorist organization) for almost 3 decades. Now the democratically elected government has cornered the LTTE into 4 squre killometer piece of land. Although the finishing of the remaining terrorist gang is just a matter of few arial bombardments, Sri Lankan government does not do that because the terrorists is keeping several thousand people as hostages. So currently the governmetn forces are trying to rescue these civilians from the LTTE and conduct a humenatarian mission.

LTTE is a terrorist organization that has roots and connections in many western countries. International weapon dealers, latest colonization experts (Norway), people who think that Sri Lanka is still a colony of UK (Mr. Milliband) and many others try to intervene with this situation.

Sadly, LTTE has taken some of the prominent news agenceis also for a ride by placing insiders in those organizations. For example, this is what the Channel 4 news UK has done few days ago.

They got some video tape of few people talking about hardships in refugee camps in Sri Lanka.
Those people in the video tape does not even show their faces and also there is no video evidance on any of the claims they mention.

Channel 4 news without any investigation aired this tape causing an agitation among international organizations.

Al Jazeera is another media organization that did a similar idiotic broadcasts. Once they showed some photographs taken from a pro LTTE web site claming Sri Lankan forces have shelled a hospital. The photos they showed even had intact glass bottles on tables where they claimed to hit a shell. There were decorative trees in a place where they claim that a shell has hit. I cannot belive that these organizations does not know about shelling and the damage a shell would cause. They just ignore those and trying to create news.

CNN is conducting a poll raising the question "Should The International Community Intervene In Sri Lanka?"

So what does the results of this poll reveal? Don't they know that most people in Sri Lanka (who are the sufferes of the real situation) does not have internet? So most people voting "Yes" for the above questions are LTTE supporters living in western countries. There are some number of people would vote "No" but those are the minority in Western world.

Still I am waiting to see a respectable media report in this issue. The same media acted for the betterment of people in swine flue is now helping terrists to kill more people.
Posted by Jaliya Ekanayake at 1:19 PM 2 comments:

University of Moratuwa Tops the Google Summer of Code 2008

It is truly amazing. This year, it is a total of 24 awards for the University of Moratuwa, where I did my undergraduate studies, and it is the rank one in the world!!!

Ms. Vishaka Nanayakkara (Head of the department - Computer Science and Engineering Department) has sent the following email which has all the details. So instead of repeating, let me paste it here.

=============
Dear all,
It is with greatest pleasure I let you know that University of Moratuwa has
become the Global Top University with Highest Number of Awards as well as
the highest number of applications in this year's Google Summer of Code. I
am certain that you will be very proud of the achievements of our students.

The information about this can be found at
http://google-opensource.blogspot.com/2008/05/this-weeks-top-10s-universities-for.html

CSE students started with one award 3 years ago and have bagged 18 GSoC
awards this year. There is one ENTC student and another first year student
from the Faculty of Engineering. With a total of 24 awards for the entire
University, University of Moratuwa has become the First in the entire world.

CSE students undoubtedly had a tremendous influence on this from Dr Sanjiva
Weerawarana. It was Sanjiva who first told them about this, it was his
guidance that led them to achieving the first award, it was his continuing
support (together with members of the FOSS community) which enabled them to
come this far. I think we at CSE owe him a lot for this great achievement.

I am certain that all of you as people who helped CSE come this far, members
of the CSE department industry consultative board, mentors, visiting
lecturers or well wishers of the department also have contributed in many
ways for the upbringing of our students and will be happy to share this
wonderful news with us.

Jaliya Ekanayake
I am currently working as a Research Software Development Engineer (RSDE) in Bing Platform Group at Microsoft Corporation. I am passionate on Systems Research and especially interested in distributed systems, parallel algorithms, and parallel runtimes. I received my Ph.D. in Computer Science from the School of Informatics and Computing at the Indiana University Bloomington in year 2010. My research advisor was Prof. Geoffrey Fox and in my Ph.D. research, I focused on the Architecture and Performance of Runtime Environments for Data Intensive Scalable Computing. As part of this work, I developed an enhanced MapReduce runtime named Twister, which was later released to the academic community by the Indiana University Bloomington. Before coming to US, I completed my undergraduate degree in Computer Science and Engineering from the University of Moratuwa Sri Lanka.